Giving Barry His Due 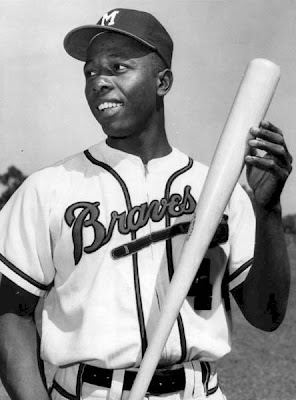 After reading Rick Reilly's piece on Barry Bonds, I found myself torn:
torn between the tremendous amount of joy & laughter the column gave
me, and the sadness that I felt afterward when thinking about Hank
Aaron. As fans of American sports (our self-proclaimed National
Pastime), we've missed out on celebrating one of our greatest sports
heroes- maybe one of our greatest American heroes. Mr. Aaron never
was the Mr. Coffee ad man like Mickey Mantle nor was he loved publicly
like Mr. October- Reggie Jackson. Hank Aaron, in his time, was known
as the "black man" who broke a white man's seemingly unbreakable
record.

As a fan of baseball since childhood, I find myself at __ years of age
in awe of the accomplishments Mr. Aaron achieved on the field, yet I
know little of him as a person off the field. Everything I can read
about and see in interviews tells me what I need to know Hank Aaron as
a person: With dignity & seemingly insurmountable cultural & personal
odds, he achieved what was then unthinkable. Hank Aaron was human
and withstood personal affronts that is despicable & inexcusable in
our age of 24/7 media and so called advances in race relations.
Frankly, I am ashamed that it has taken over thirty years for our
society, which views sports achievement as an ultimate pantheon to
success to recognize Hank Aaron for the class act that he always was-
not to mention that he shatter a record that stood for DECADES.

Records are made to be broken and in this ho-hum chase of the only
baseball record that matters, I am saddened that Hank Aaron will have
to have the asterisk beside his tally of 755 just as Roger Maris did
with 61. With great effort, comes great sacrifice.

Barry, look in the mirror and tell us all what did you ever do to

justify your efforts- proven or not?

Posted by junejulyblue at 9:25 PM