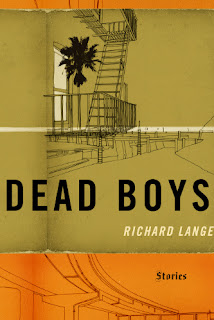 I’ve always said that I’d rather take a punch than get a paper cut. Paper cuts suck. The worst ones near your fingernails really suck. The worst I ever had was in junior high when I was day dreaming in class in stead of paying attention. Paper in hand, I was holding it near my face for a reason that I cannot remember and I proceeded to rub it across the under part of my nose near the top of my lip. The pain it caused haunts me to this day.

Dead Boys is a book of based short stories by Richard Lange. This is not your glamorous variety of mini-prose nor is it crime riddled with “the cops / the D.A.” f*cked me kind of stories either. These are cross sections in the underbelly- people getting by; alcoholic; riddled with despair; criminal; failure; loss. Tee-totaling near the edge of reason, some of the characters cannot possibly function on a day to day basis, yet they wake up for another taste of bars that open at or relationships that creep by in mind numbing uneasiness. They live in the minute to minute moments of their lives- minds always thinking, always moving, and seeing everything near the edge of madness.

A man takes his teenage junkie/prostitute roommate across town to get married to her pimp only to have his car break down near the very bridge where he is hounded by the memory of a savage and unexplained personal tragedy.

An advertising guy ends a letter to an old classmate who lives in with the following: “Remember how you said it’s dark there six months out of the year? Well, it’s dark here all the time. P.S. Don’t write back.”

Dead Boys is like that paper cut I self-inflicted as a teenager- the difference is you have to add sand and rubbing alcohol into the mix. Brutally honest about what lives are like on the far end of the spectrum, Richard Lange taps into a vein you want to hit again & again.

Posted by junejulyblue at 9:25 AM

Thanks for the great writeup. I'm so glad you liked the book.