So, our doofus of a President has decided to send more troops to Iraq- 20,000 more because the course of action we are taking there is riddled with past mistakes (his words and finally, FINALLY, his errors or so he says) and the way to correct it is to of course throw more troops and money at the problem with hope that it will help.

Now, I am not a rocket scientist nor did I sleep at that hotel they mention on T.V. a lot, but I must say that sending more troops is something we should have done a year or two ago when things were not so out of hand. Not now when the majority of believes this war has been mishandled; that the American people think they have been mislead; and when the world looks at us with a ridiculous amount of scorn, pity and anger.

One day after his speech of defeat there are already rumblings that Congress will not approve further spending for this war (an illegal & unjustified one in my opinion- and yes, I know Saddam was a bad guy, but he did not start this war but Georgie Boy wanted it to be that way. Maybe he played the Six Degrees of Kevin Bacon game) 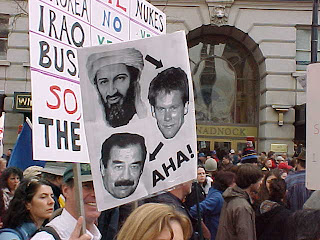 and I am not sure they are incorrect in the attempt, but I know that the Republican Right Wingers from Hell will come out of the woodwork in force to say that Democrats are against our troops-- a lot of B.S.

On this matter, there is only one clear answer:

Pulling out of now or later is going to be hell for the Iraqi public no matter the time. They did not ask for us to give them a democracy nor invade their country yet we are going to force it on them while we are there and watch it crumble once we are gone. We went in for profit, oil and a leadership change. Well, Saddam is dead. Halliburton/Dick Cheney is making money hand over fist. Oil was to be a deciding factor in financing this war, yet all I see is American gas price's rising up to where a lot of other countries are at.

We don’t need more troops in . We need to leave and throw a blanket of money their direction and kiss their ___ for years to come.

Posted by junejulyblue at 7:07 PM

how's life ? junejulyblue.blogspot.com admin discovered your website via yahoo but it was hard to find and I see you could have more visitors because there are not so many comments yet. I have found website which offer to dramatically increase traffic to your blog http://mass-backlinks.com they claim they managed to get close to 4000 visitors/day using their services you could also get lot more targeted traffic from search engines as you have now. I used their services and got significantly more visitors to my website. Hope this helps :) They offer most cost effective services to increase website traffic at this website http://mass-backlinks.com